Sunshine, bass, and…dirt in my face? This year’s Sunset Music Festival was, by all accounts, a huge success. Headlined by huge acts including Jack U, Hardwell, The Chainsmokers, and Galantis, SMF showcased big names, big production, and an overall effort that provided a great value to anyone looking to attend a mid-sized electronic music festival in central Florida.

*Note: I understand this review is a bit late. Grad school will do that.

With that being said, let me get my one suggestion for improvement out of the way: Add flooring. I don’t know if it’s something that was limited by the venue, the budget, or it was something that was just overlooked, but the dirt and sand kicked up by thousands of us of dancing the day and night away was a bit overwhelming at times.

We brought a bandana on Day 2, and that helped a bit, but that didn’t stop me from losing my voice (presumably from dirt inhalation) and having to explain myself at my office job for the next several days.

If the dust storm was something that wasn’t anticipated, then let it be a testament to the good vibes and energy that took place at Raymond James Stadium this past Memorial Day weekend. The dance floor was certainly moving.

Now that that’s out of the way, let’s get back to how SMF Tampa 2016 was the event’s best experience to date.

Looking at Sunset Music Festival’s lineup shows just how well connected the organizer, Disco Donnie Presents, is in the industry. Under SFX’s umbrella, DDP takes full advantages of the connections it’s parent company holds and is able to bring in a wide variety of acts from many different genres. SMF had a little something for everyone across the three stages. 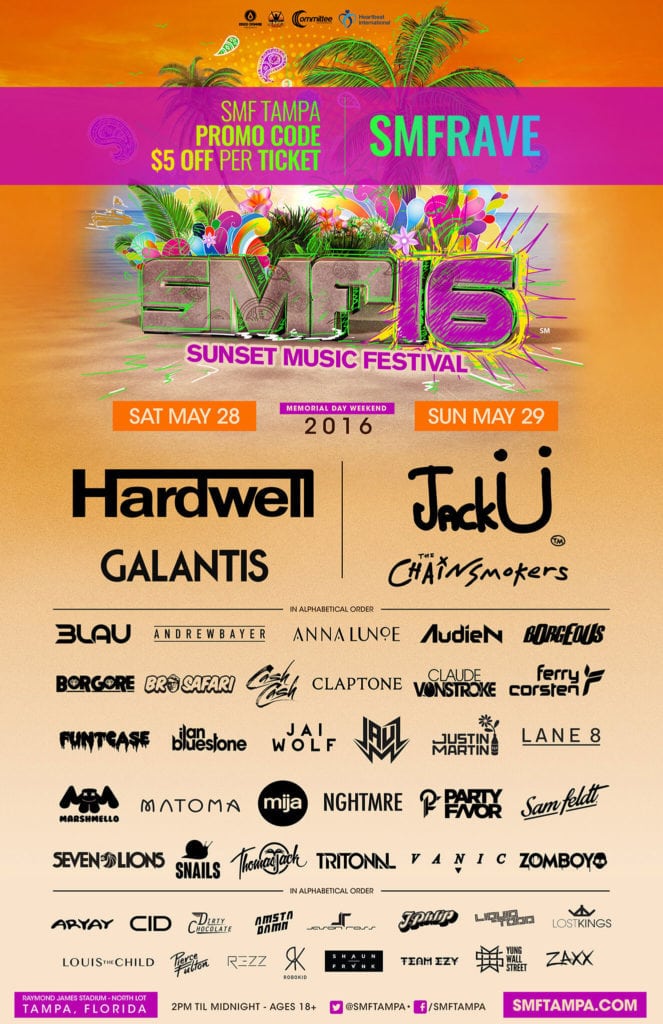 This was my first time attending SMF Tampa. I’ve heard some logistical horror stories from past events. They seem primarily geared around the fact that it rained at previous events, and I went through gates in 2016 with an open mind.

SMF 2016 was cashless, so I had to load up our RFID wristbands using their website or app. If you really wanted to pay with cash, there were top up stations at the event. Overall, the cashless experience was smooth. I only loaded what I needed, so I didn’t have to worry about the refund process which cost a few dollars in the form of a “refund fee”.

I live Uber distance to the event, but I chose to drive. Parking was around $15-$20 depending on how close you wanted to be. We parked on the Raymond James Festival grounds and getting in and out was surprisingly easy compared to other events I’ve driven to. The Uber pickup was far enough away not to add to the congestion, and we saw lots of people taking advantage of that option. If you’re traveling to Tampa and don’t want to drive to the event, Uber’s a good option since you’ll likely not be staying by Raymond James Stadium.

SMF is a day rave in May in Florida. It’s hot. There were at least two water stations that I could remember, and they were never overly busy, but I think at least one more water station would have made getting water between sets a bit easier. The reusable water bottles they sold were looked like 16 oz. bottles. They were small if you’re used to bottles from EDC. Because of this, I just brought in an empty plastic water bottle and refilled. 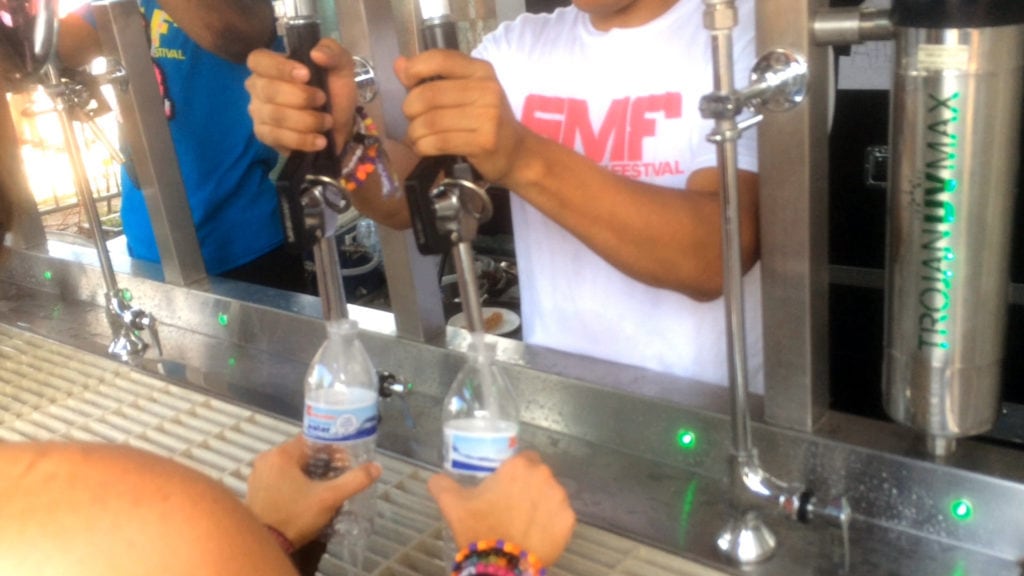 SMF: If you’re listening, I would’ve bought a your water bottle if it didn’t look like I’d have to refill it every three sips. Maybe offer two options: 16 oz. and 24 oz.?

On the upside, having a smaller bottle would likely mean it’s lighter to carry when full which does make a difference when you’re jumping around a lot.

Medical tents were easy to access, but they don’t carry allergy medicine, in case you were wondering. Given you can’t bring this kind of stuff through the gates, I thought that was odd. However, I don’t know if other events carry allergy remedies, either.

I’ve only seen prior SMF stages in photos, but with that being said, I can confidently say that this year was, once again, a step up from previous years. SMF doesn’t have massive traveling stages like some of the bigger players in the festival scene, so I was curious at what kind of production I would be experiencing. 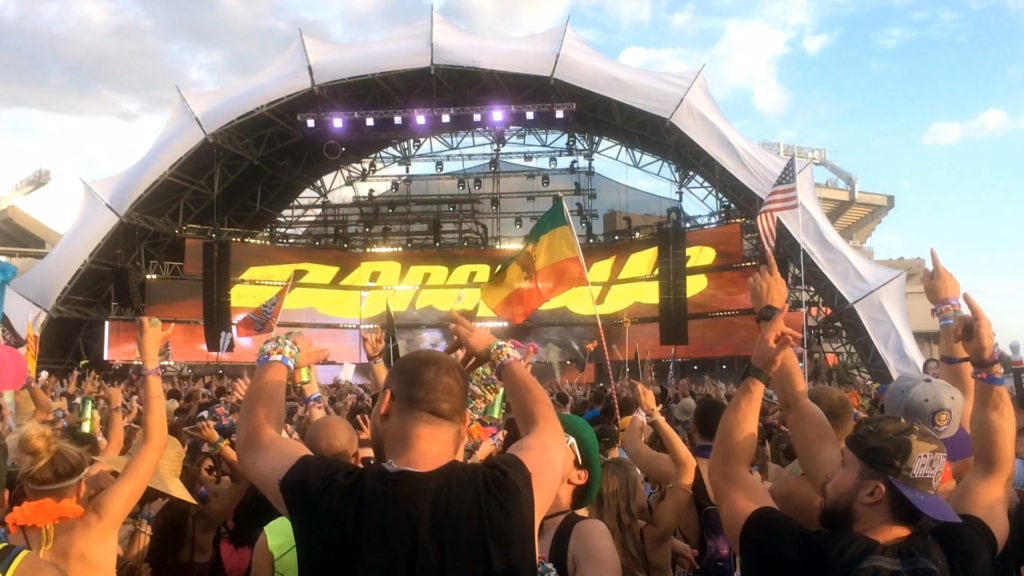 The main stage was called the Sunset Stage and was constructed from SMFs iconic arch structure. This year, it looks like they squeezed in as many LED screens as the structure could hold. Short of putting LED screens at the very top, they may need to move to a bigger “housing” next year if they keep scaling up. Regardless, the light output was strong at the Sunset Stage and the VIP section had lighting along with CO2 and confetti cannons flanking the main dance area. SMF also brought out what appeared to be a fire hose to keep the crowd cool if you were in the “splash zone”, as I’m going to call it. 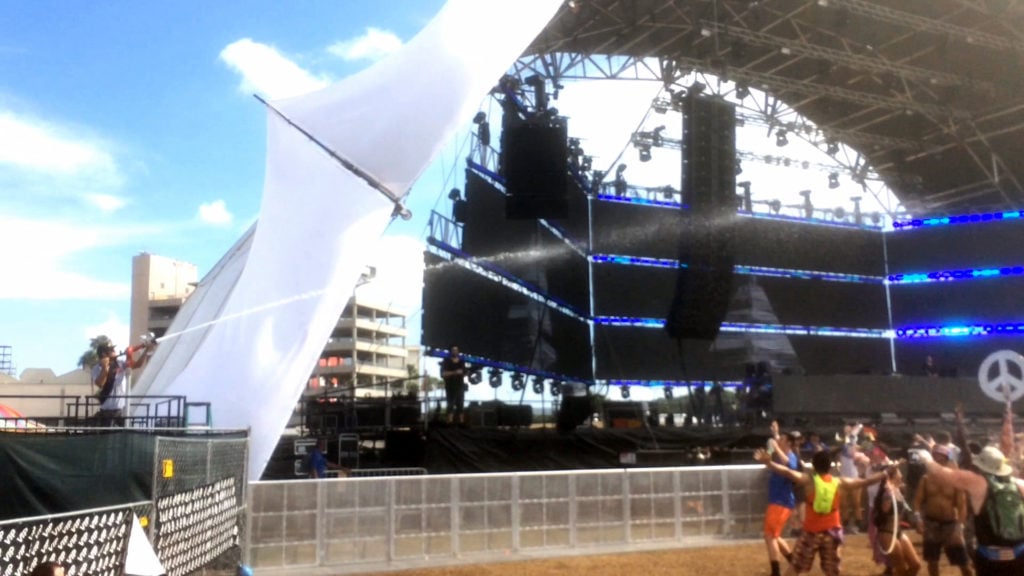 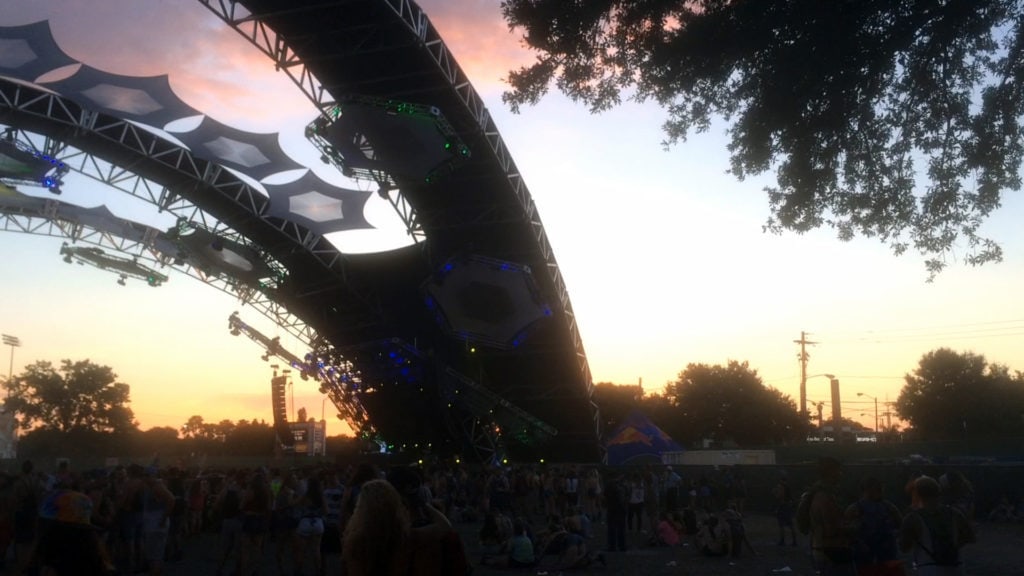 In one corner of the festival grounds, you could find the Eclipse Stage. This stage featured the artist booth complete with the obligatory LED arrays. The pyrotechnics from this stage were a fun experience given how it felt more intimate than the Sunset Stage. With three large arches reaching from the artist booth up and over the crowd, it was definitely unique and something I haven’t seen at any other festival. It was a creative use of rigging typically used to construct a megastructure at events like Ultra and EDC. 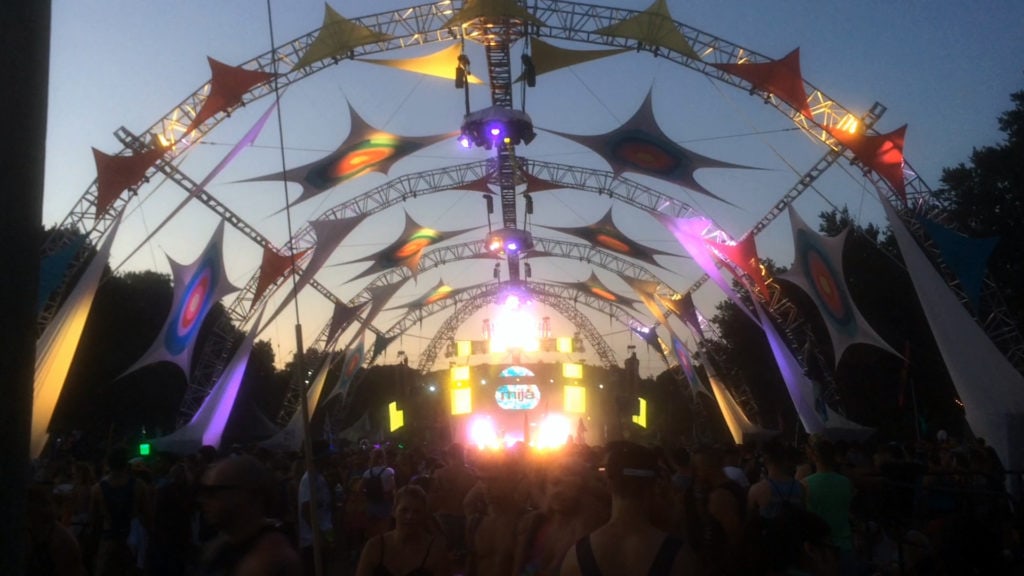 This stage was the most intimate of all the stages and could easily be described as an open air megastructure nestled between two rows of trees. It was immersive, yet open at the same time. For those looking for deeper vibes, the Horizons Stage is where you wanted to be.

Overall, sound bleed was an issue if you towards the back of the Sunset Stage or Horizons Stage, but you didn’t have to venture very close to any of the stages to escape it. I’m happy to see Sunset Music Festival continuing to be able to bring a variety of acts and step up the level of production at the same time.

Like I said, it’s hot at this time of year, and Sunset Music Festival did a good job at providing relief from the heat. There were trees, the Eclipse Stage’s arches provided some shade depending on where you were standing, there was a big tent in the middle of the grounds, and there was even an air-conditioned cool down tent complete with blacklights and neon art. You could walk through here when you needed a break from the sun or were getting too hot. There was also a mini-golf course. 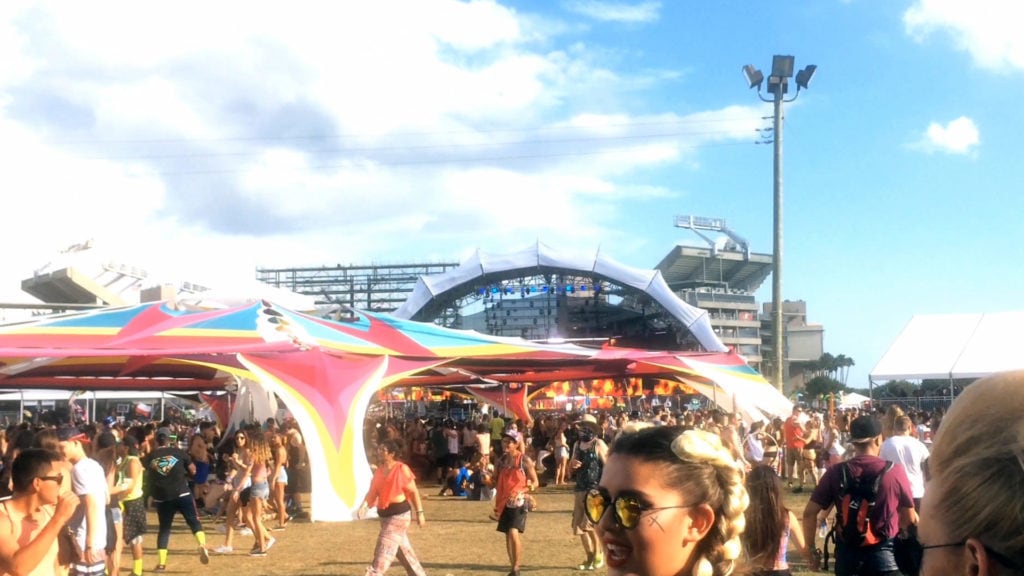 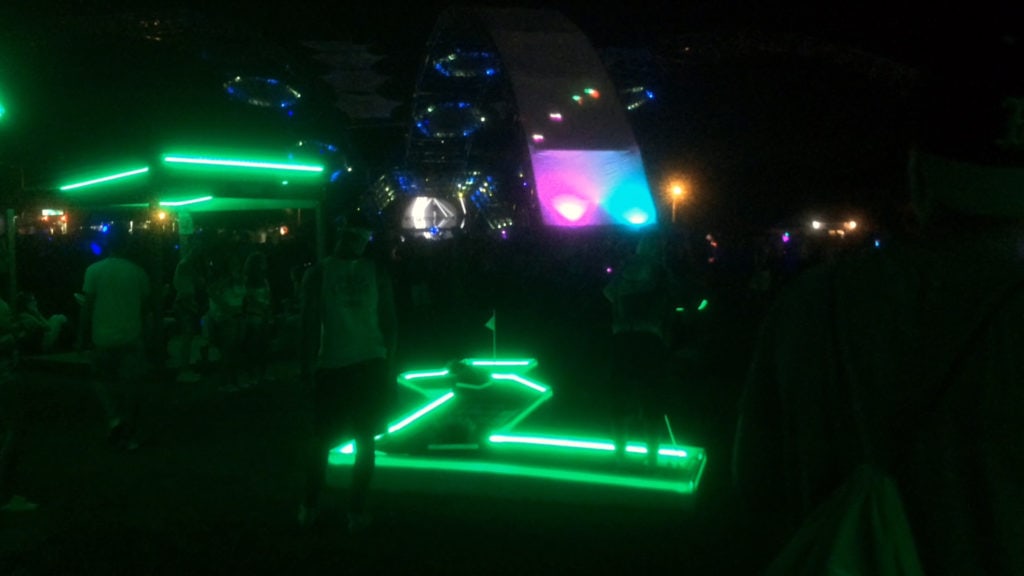 The bathroom situation was surprisingly fine (this is where lots of festivals fall short), and the wait was never too long, if there even was a wait. I can’t comment on toilet paper because I always bring my own. Pro tip: Bring your own toilet paper, especially if you’re a girl.

There was a wide variety of food available including options from local food trucks. I saw the biggest burrito in my life at SMF 2016. Three guys were sharing it. I swear. Hungry Howie’s was there with large pizza slices starting at $4US. $1US equaled $1SMF. Thank you, SMF, for not hitting us with the festival dollar exchange rate tax. I got a huge cup of mixed fruit for $9US and a banana for $1US.

With multiple universities in the Tampa area and Orlando just a short drive away, Sunset Music Festival offers ravers in the Southeast an excellent combination of big names, musical variety, and impressive production.

Tampa is not an expensive city relative to say, Miami, so those traveling to the event will enjoy lower costs.

Coming next year? Details haven’t been announced, but for the past two years, early bird tickets have gone on sale in late November to early December. This is the best time to get your tickets since prices will increase a few times over the months leading up to the festival.

Like saving money? Use SMFRAVE for an easy discount on your Sunset Music Festival 2017 tickets. You’ll see a spot to enter a promo code when you’re checking out.