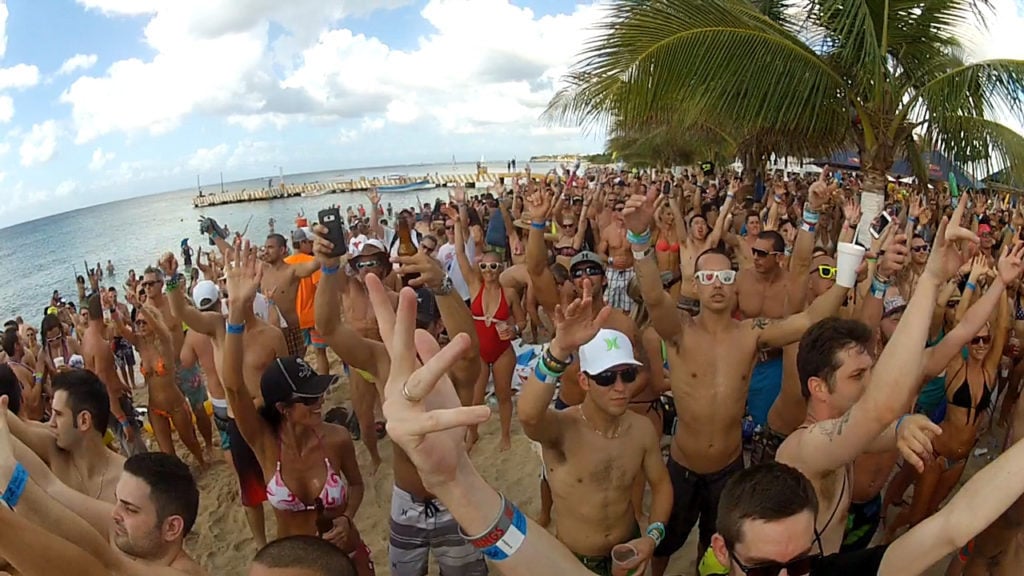 After breakfast overlooking Cozumel’s port, we disembark the ship as the first step on our journey to Playa Mia, the venue for Groove Cruise’s all-inclusive private beach party. It’s still early, probably about 10am. The sky is clear. The sun is bright. This is the best weather we’ve had all cruise. It’s perfect beach party weather. There was a brief hawker-filled walk to the taxi queue, where we happened to meet another couple who were interested in splitting the cost of the cab ride.

The journey was short, maybe 10 minutes, but during this time, we were able to have a short conversation with our taxi-mates. We would come to find out that the guy was actually one of the artists playing on Groove Cruise! Our first cab ride was shared with people in Despicable Me minion costumes, and now this cab ride is shared with one of the artists from the ship! There were well over 2500 people on this Groove Cruise, but that is relatively small compared to festivals that regularly bring in guest counts into the 5 and 6 figures. One of the benefits of a small crowd is encounters like these, where you bump into the artists when you least expect it.

We arrive at Playa Mia, and there is a short line to check in. The Groove Cruise guests and Playa Mia staff are already having fun taking pictures with blow up dolls. For whatever reason, there is an abundance of blow up dolls on this cruise – and it’s hilarious, every time. 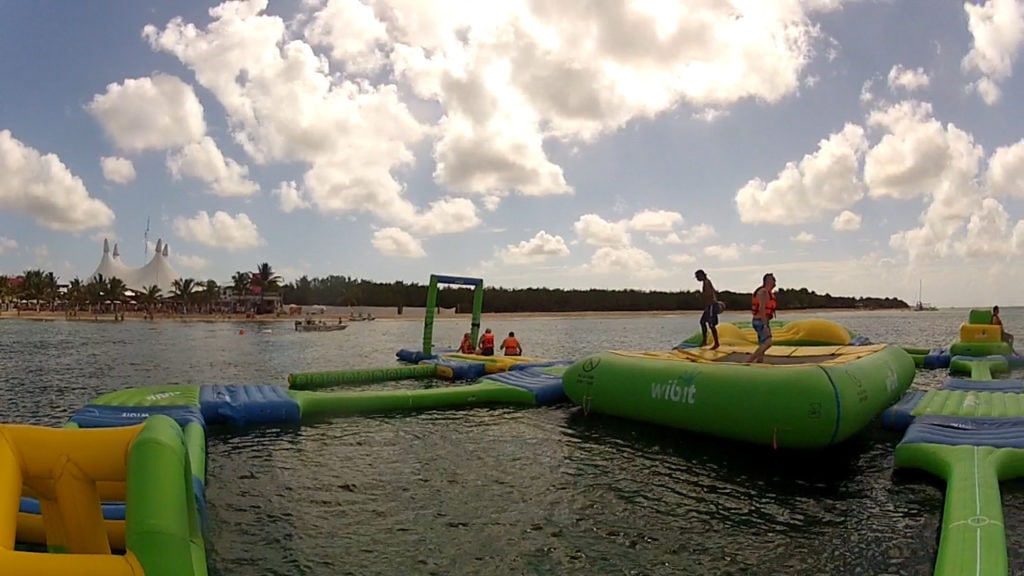 Once inside, we stash our belongings in a locker and set our sights on the floating water park just offshore. The lines at the open bar areas were already pretty long especially considering it’s about 11am (doesn’t stop Groove Cruisers!), and the beach area hasn’t filled up yet, so we give in to our childlike desire for silly fun and swim out to the inflatable water park. The music can be heard clearly from all the way out here, which added a nice soundtrack to our rope swing and water slide fun. 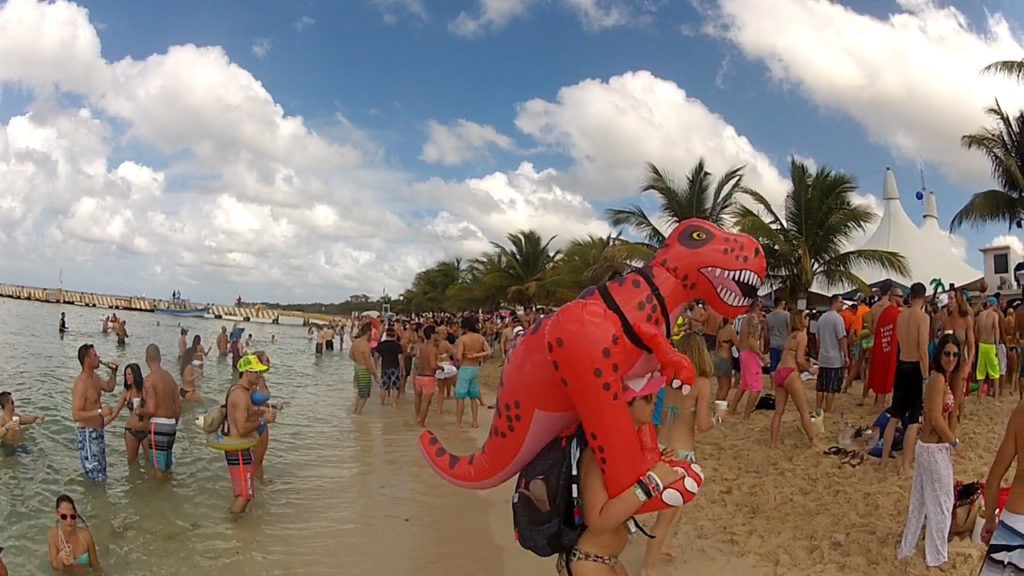 A brief swim back through the beautiful water, and we’re ready to join the everyone else who’s showed up. The party is really taking off. Today’s day theme is “Whatever Floats Your Boat”. It went completely over my head, so I was surprised at the number of inflatables that were present. Blow up dolls (of course), animals of different varieties (including a monkey, a huge whale, and a zebra), and even a rather large inflatable dinosaur fully equipped with chest mounted GoPro made an appearance. The location of the stage was perfect. You could stand in the shade under the palm trees or out in the sun. Either way, you got to enjoy sand between your toes while the music blasts. You could even hang out and dance in the water, which many of us did. The on-site buffet and multiple open bar locations kept us sustained during the day. Groove Cruise’s private beach party was absolutely a highlight of the cruise, and like everything else, exceeded all expectations. 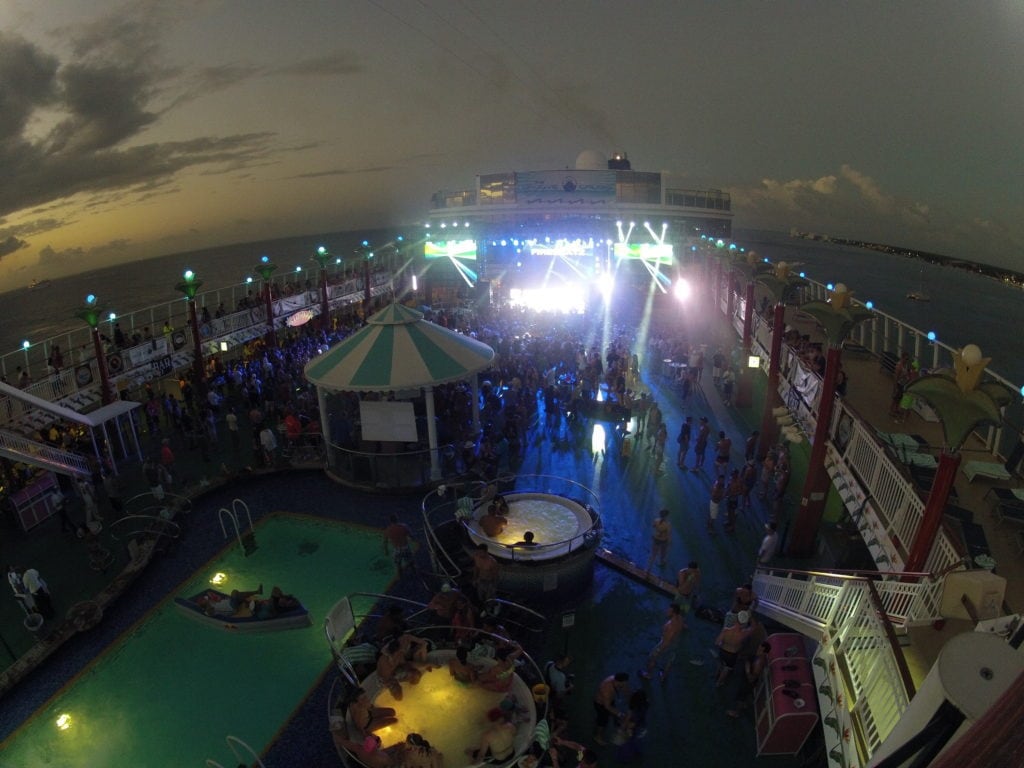 The beach party came to a close, and the energy moved back to the ship in the form of a poolside set with the Cozumel coast on one side of us and a beautiful sunset on the other. A big headliner takes to the stage and provides us with one of the more memorable sets of the cruise playing both their original and remixed tracks to an eager crowd that sings along at every opportunity. Now, when I hear their music played, I don’t get chills from a well composed synth melody or vocal, but rather from the amazing memories it brings back.

Naturally, we passed out again only to wake up at some random late night hour to continue on. I’m starting to recognize a pattern here. Anyways, day 3’s night theme is “Fetish Night”. Of course, we had costumes prepared, but I’m going to save the pictures and description on this one and let you use your imagination. Actually, I will share that one individual was dressed as a giant male part and it was very funny watching him try to walk anywhere!

We checked out some of the other hot spots on the ship, the Spinnaker Lounge and the Bliss Ultra Lounge, which were playing trance and deep house, respectively. These were smaller, more intimate environments that lended themselves very well to interaction with the DJ. We even recognized the DJ at Bliss as the same guy who was hanging out with a group behind us at the buffet at the beach party. These random encounters really make the point that the artists are on Groove Cruise WITH us, and not just making appearances on stage. 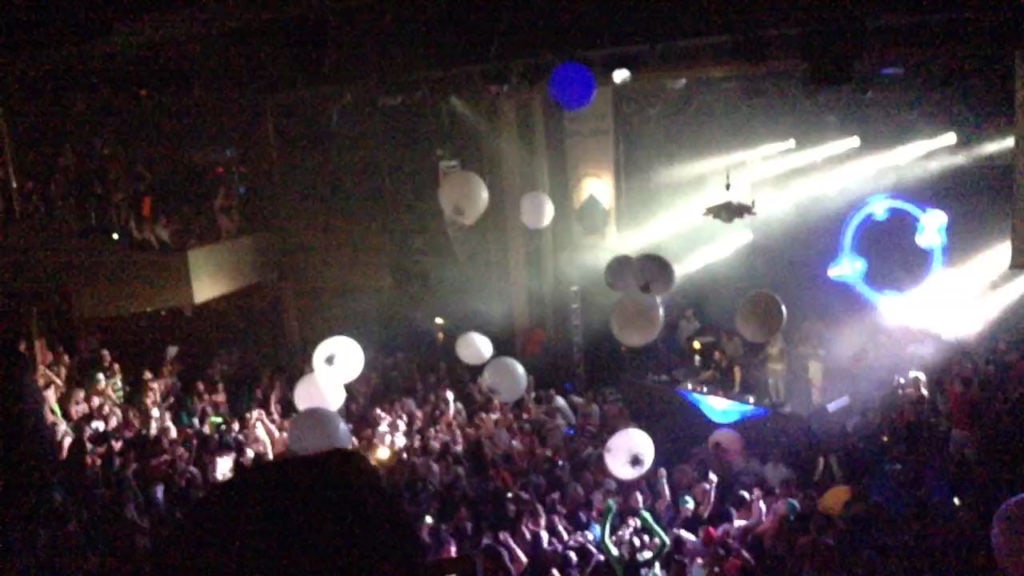 We head back to the theater to catch a set with a big-name headliner who we’ve seen before, but we know puts on a great set. The theater is packed, as expected, but as mentioned before, it’s surprisingly easily to move around. Perfectly timecoded visual displays engulf the LED walls as balloons fall from ceiling giving the crowd something to play with while drop after drop is released through the speakers. Some performers in LED suits on stilts came out to further wow the crowd. The artist and sound is familiar, but the experience, because this is Groove Cruise after all, is completely unique. This would be our last party spot for the night, and again, I’m thinking back through the day’s events – I woke up in Mexico, partied on a private beach all day, and now I’m wearing a questionable outfit while getting a 2-hour set from one of the biggest names in EDM! Crazy!