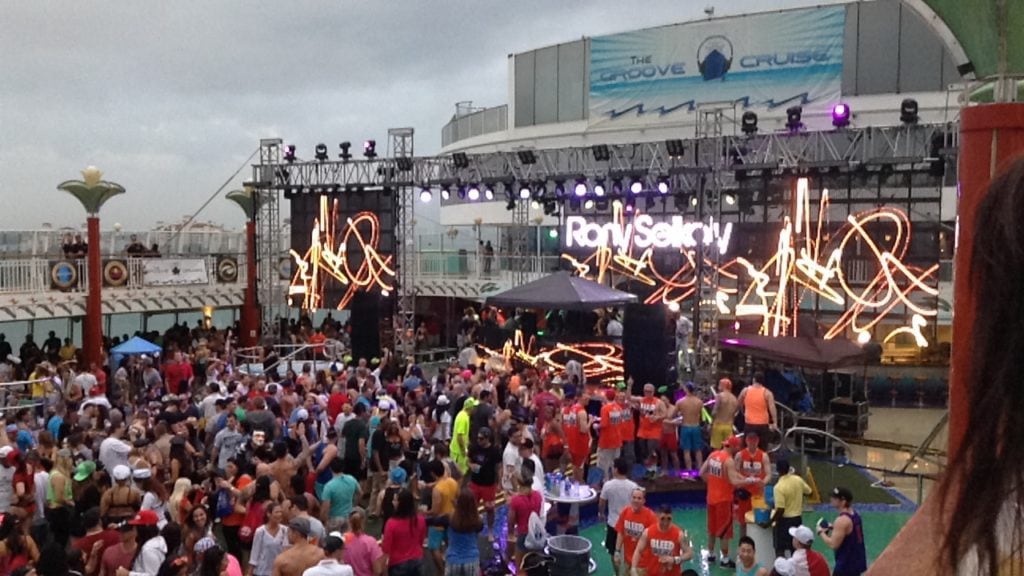 After lunch, we head straight for the pool area. My girlfriend and I are in full-on party mode. The Groove Cruise organizers have transformed the Norwegian Pearl’s pool area into the ship’s main stage with an incredible level of production. The stage is placed at one end, with the entire pool area in front of it, higher viewing decks on the side and back, and an even higher viewing area doubling as the ship’s Sun Deck. There is no bad view of the stage, even from within the hot tubs. That’s right, you can enjoy the music with a great view of the stage from inside a hot tub – awesome. One of the pools and it’s hot tubs are covered to provide a dancing area. The stage is outfitted with LED walls, LED bars, spotlights, and CO2 cannons. The sound is loud and clear and fills the venue as well as any event I’ve been to, no complaints there.

The music is loud, people are dancing, and the party is underway. After a short period of getting familiar with our new home for the weekend, we go through the usual muster drill to ensure that everyone aboard the ship is familiar with the safety procedures. This is the quietest the ship will be all weekend. The safety speech is over, everyone cheers, the Groove Cruise podcast soundtrack begins playing over the speaker system, and the DJ in the atrium (our muster station) picks up where he left off. 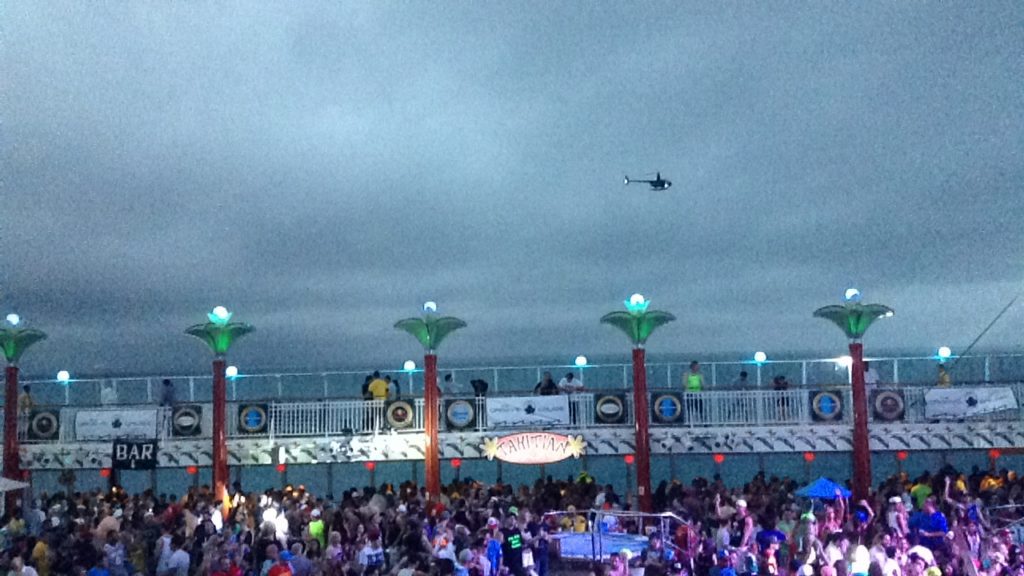 Shortly after heading back out to the pool area for a bit, the ship begins to the move. We’re finally leaving port. So much has happened, yet there’s so much to look forward to. The sounds of a helicopter can be heard overhead, then the MC announces that it’s family photo time! He repeatedly let’s the crowd know when to go absolutely crazy as the helicopter flies overhead and the photographer gets the shots.

The final family photos are taken from the stage, and at this point, it really feels that anything resembling a schedule has vanished. Of course, I know that the beach party in a couple of days occurs at a specific time, but otherwise, time and schedules just seemed to fade away. There will be music around the clock, food available at any time, and a cabin waiting for me when I’m tired. You don’t get this feeling at any other event. Other events have very clear ending times, and these are always apparent and in your mind. I know that the cruise ends on Monday, but I can’t bring myself to comprehend that as everything here seems to be perfectly geared to keep you in the moment. The party goes on, and all is well.

Except it’s raining. It’s not storming, but it’s not pretty outside either. The sky is cloudy and light showers came and went. I can’t fault the organizers for this one. This is actually a great time of year for a Caribbean cruise, but today’s weather situation just isn’t as ideal as one would prefer. But, I’m on Groove Cruise, that’s all that matters. And everyone else seemed to agree as the rain was a minor inconvenience in an otherwise perfect sail away party. 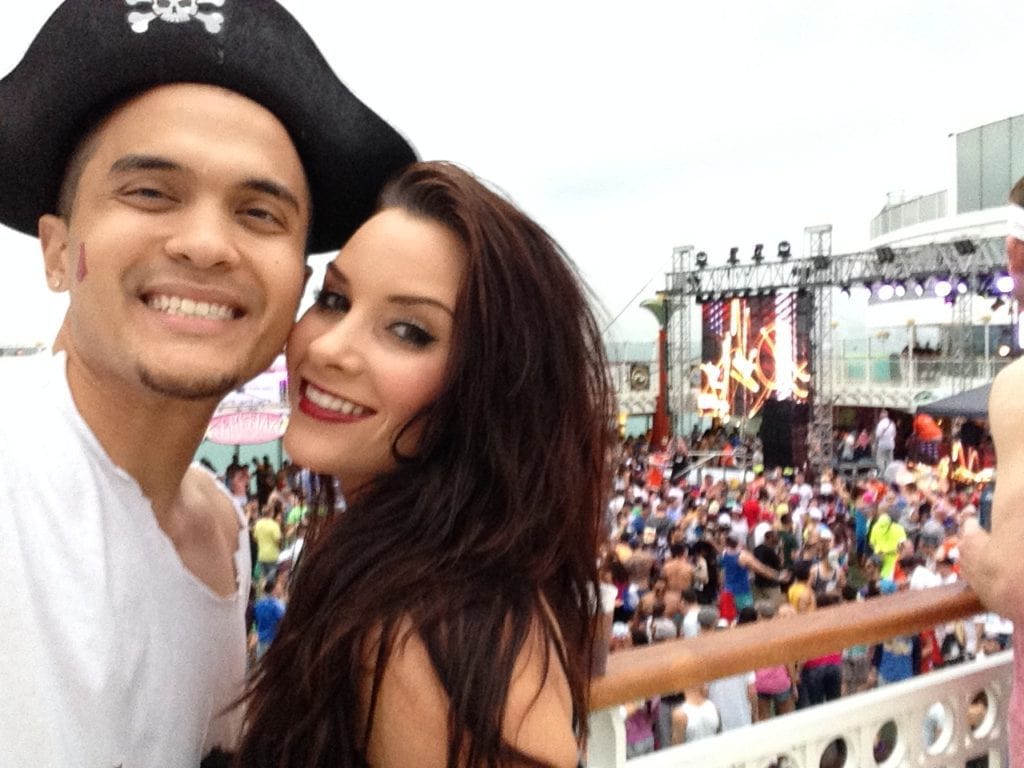 It’s getting dark, and you know what that means? Time to get into costume for tonight’s theme, Pirates of the Caribbean! Theme days and nights play a significant role in the Groove Cruise experience and we all looked awesome. There’s something about being on a ship with a bunch of party animals dressed like pirates. My girlfriend was wearing her sexy pirate outfit, and I was in my relatively homemade, pieced together costume. My sword had a GoPro mounted to it. I’m so creative. Others had elaborate hats and parrots and eye patches. The high level of participation really set the tone of the themes’ role on this cruise. Good thing I packed three more costumes. 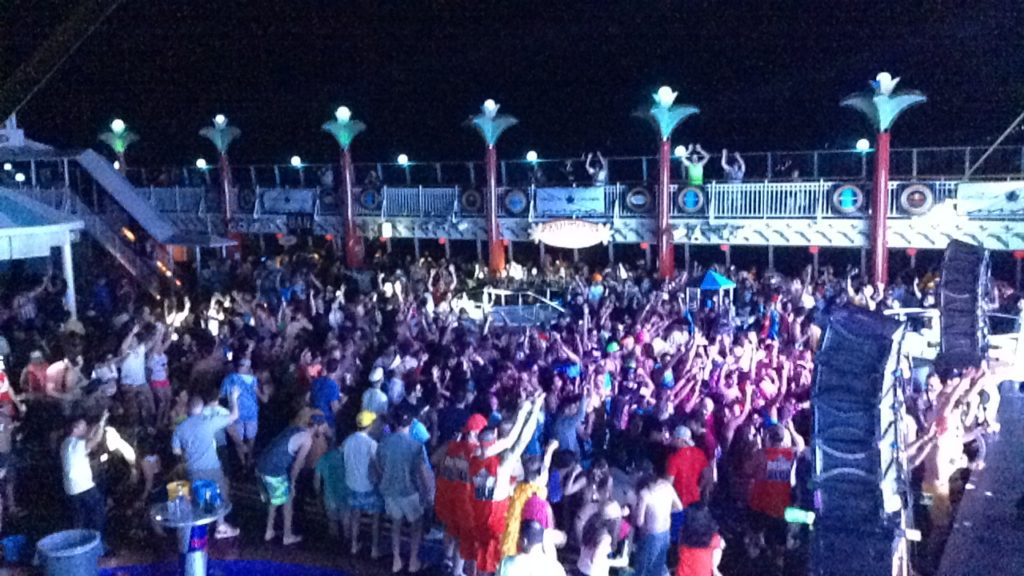 The stage at the pool continues to be a focal point for Groove Cruisers. There are other parties going on at different venues on the ship, but there’s something about being outside with the breeze off the gulf and stars overhead that created an atmosphere we didn’t want to leave. Of course, we’ll end up visiting the other parties at some point anyways, so why not enjoy the moment? I’m surrounded by positive people. I’ve been at a floating pool party all day. I’m dressed as a pirate. This is great!

Then, it hits me. I have an idea. I get those from time to time. Why don’t we go to sleep for a bit now so we wake up extra early and can enjoy a sunrise over the water at the afterhours party? Sounds awesome. We head back to our cabin. We’re tired anyways. It’s been a crazy and long day. It has to be what…2…3am? No. Nearly 10 hours of partying later, it’s 9:30pm. As I pass out, I remember a piece of advice that I ignored earlier. It was about pacing myself. Oh well! I’ll give it another go tomorrow!

This post is part of my Groove Cruise Miami 2014 Review series. Here’s the full list of posts in the series:

Pictures from top to bottom:
View of the pool stage from upper viewing area.
Photographer helicopter overhead.
My girlfriend and I on our pirate costumes.
Pool stage crowd at night.

Part 4 of my Groove Cruise Miami 2014 Review series coming up!