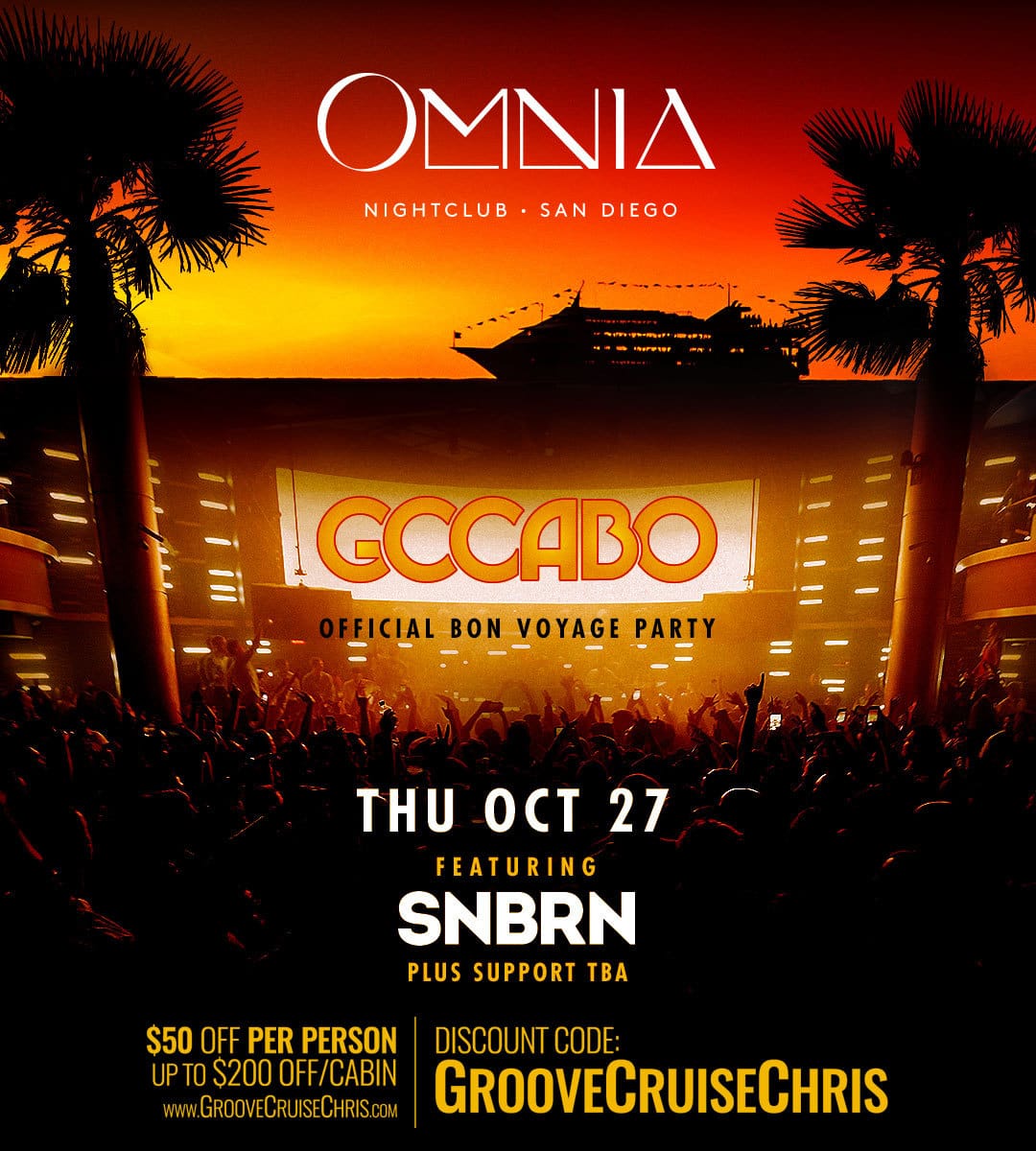 For some of you, 5 days of music programmed around the clock may not be enough. Waiting until October 28 to get the GCCABO party started might be too long.

No worries. Groove Cruise just announced that there will be an official Bon Voyage Party the night before the Norwegian Sun sets sail to Mexico.

On October 27th, OMNIA Nightclub will be hosting the official GCCABO pre-party. Featuring SNBRN with support to be announced, members of the GCFAM who want to get the party started early can kick off Halloween weekend a day early.

Here’s the link to purchase your ticket to the official pre-party at OMNIA San Diego: https://ticketdriver.com/omniasd/buy/tickets/event/138957?afc=O00OSEOK

This event is open to anyone (21+, of course), so even if you’re not sailing on GCCABO this year (why not?!), you can come out and give the GCFAM a proper send off.

OMNIA launched a “bar card” in February, and it’s been discounted if you use the link above.

Save 25% on general pre-sale tickets by entering the promo code: GCCabo.

GCFAM, if you’re planning on attending the pre-party, know that OMNIA requires “proper nightlife attire”. OMNIA is part of the Hakkasan Group, so you know they expect guests to dress accordingly to their venues.

I mention this because Groove Cruise attire usually consists of swimwear and costumes, so you may have not planned on bringing “proper nightlife attire”. If you’re heading to the official Bon Voyage Party, then be sure to pack the right clothes or be ready to buy some in San Diego. 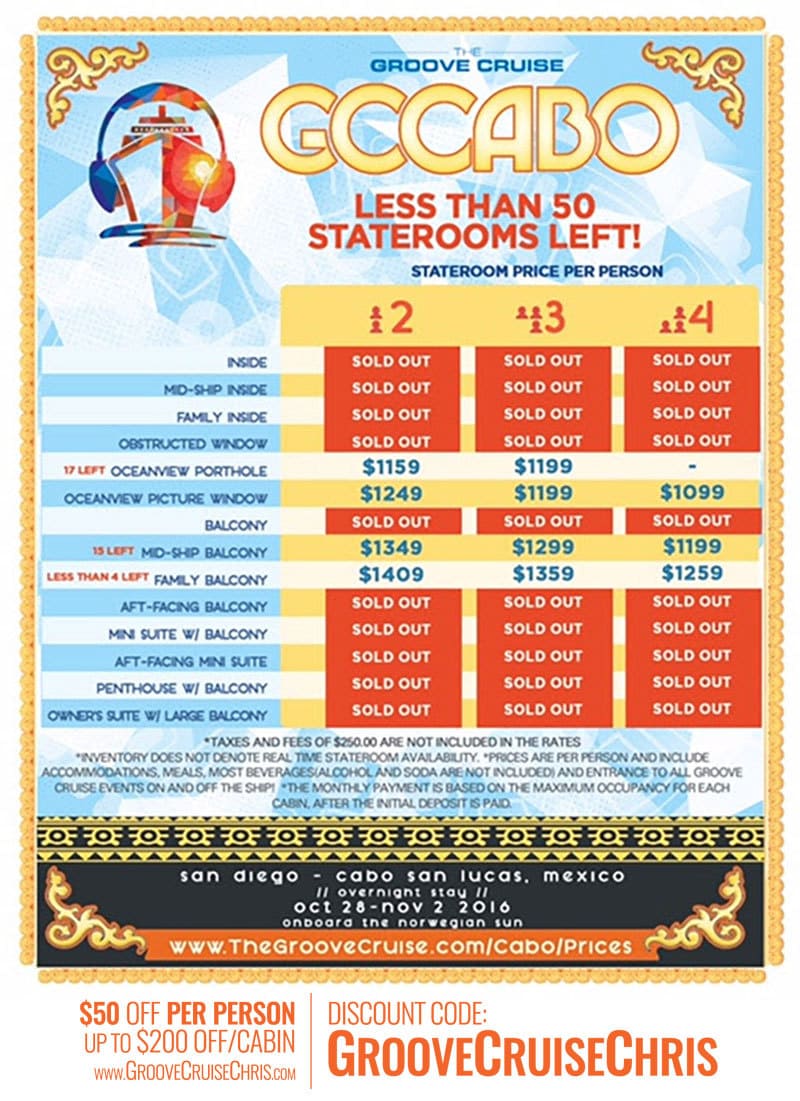 Prices went up again on 9/28. Book one of the handful of cabins left now or you’ll miss the ship. Save some money by using my discount code, GrooveCruiseChris (How do I use this code?), giving you $50 off per person (up to $200/cabin).

My Beats Headphones Giveaway has ended for GCCABO 2016, but you can still enter if you’re going on GCMIA 2017. Just use my discount code when booking your GCMIA 2017 cabin, and you’ll be automatically entered to win a pair of Beats for your whole cabin. Full details here.

Word is that due to some unfortunate circumstances not related to Groove Cruise, Michael Calfan will not be able to make the event.

With that being said, GCCABO’s lineup is being joined by two more artists: Moon Boots and Jonas Blue. 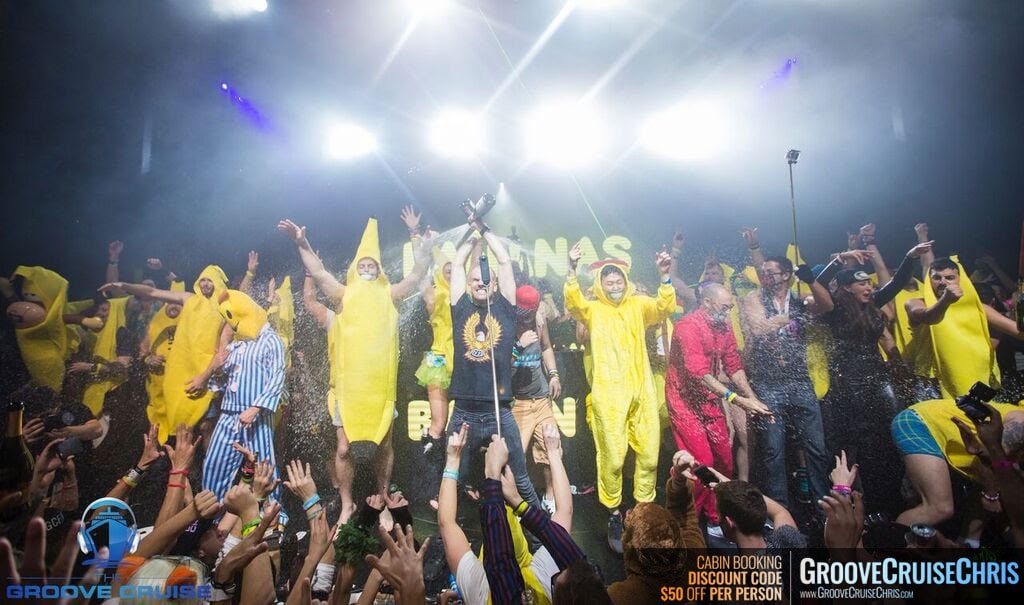